Children's Books by Sonia Manzano, a.k.a "Maria" from Sesame Street!

Sonia Manzano, better known to millions of children and adults as “Maria” from Sesame Street, is also the author of several books for young children. Discover them with Nashville Public Library!

In October, I got the chance to attend the National Families Learning Summit in Detroit, Michigan. One of the absolute highlights of this conference was a Keynote Speech by Sonia Manzano, better known to millions of children and adults as “Maria” from Sesame Street. Funny and warm, Manzano spoke forthrightly of her upbringing in the South Bronx as the child of Puerto Rican parents. In the midst of a tumultuous home life, Manzano found refuge in both television and books. People who looked like her, however—Puerto Rican, brown-skinned, and living in a big city—were nowhere to be found. 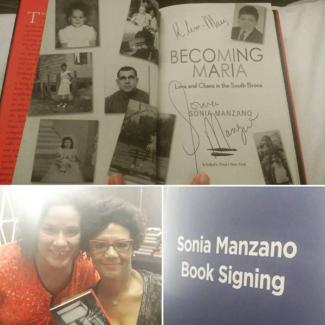 The blog author with Sonia Manzano.

We all know Manzano’s impact on the television landscape. For over 40 years, she welcomed children of all backgrounds to Sesame Street. In addtion to being an actor, Manzano is an author. She has published three picture books and a memoir for Young Adult readers and beyond. Discover her books for younger readers below!

“Once, a long while ago,” the whole Third Avenue neighborhood in the Bronx went to the beach at an Enchanted State Park. Such is the premise of the wonderfully playful No Dogs Allowed!  Iris, the book’s protagonist, is seven years old. She lives with her big sister, Shorty the Fortune-teller (she tells the future by rolling her eyes), her busy Mami and her clever Papi. Rounding out the clan is her dog, El Exigente,* so named because he does nothing.

The family gets ready to head out—to “beat the traffic and get a good picnic table”—before the sun is up. After packing all the essentials, meeting up with the rest of the neighborhood, breaking down on the way there, and getting lost, they finally arrive at their destination. However, an enchanted sign bears terrible news: NO DOGS ALLOWED! What will Iris and everyone else do? This is a charming book with touches of both traditional fairy tales and Puerto Rican culture (ah, what would a trip to the beach be without a game of dominoes?). “You never know when something wonderful will happen,” says Ruthie, the protagonist of A Box Full of Kittens. She wants to watch Superman, but her mom has a job for her. Her Aunt Juanita is due to have a baby at any moment, and she needs some company. Maybe her aunt will need a hero when her time comes, and Ruthie is going to be that hero. In the midst of procuring the Puerto Rican delicacies that Aunt Juanita craves, Ruthie comes across a box of kittens. And she loves kittens. She “loves, loves, loves, loves” kittens. Will Ruthie remember Aunt Juanita and the baby? What of her dreams of heroism? Read to find out what happens when the baby does come, right on time. A Box Full of Kittens

Finally, as we are in the holiday season, Miracle on 133rd Street is a fitting bookend to this look at Sonia Manzano’s picture books for children. It’s Christmas Eve, and José’s mother is trying to fit the roast in the oven. If they were still in Puerto Rico, they could do it outside on a spit. José suggests that they use a pizza oven, and our story is off and running. On the way to Regular Ray’s Pizzeria,** José and his father encounter all their neighbors bemoaning the hustle and bustle and expense of the holiday season. On the way back to their apartment, arms laden with a roast redolent with garlic and olive oil, their neighbors get into the spirit of the season. Never doubt the power of roasted meat—and books, of course—to bring people together. * Exigente is demanding in Spanish. It’s a play on words. ;)

Becoming Maria: Love and Chaos in the South Bronx

The Revolution of Evelyn Serrano