Over the last few weeks, we have slowly begun to inspect and preserve the film collection. The inspection process for film can be time-consuming and highly technical. But it is the only way to identify the collection and it is the first step to preservation, digitization, and access.

I’m Melanie Meents, and I’m a librarian and archivist by training. This is my first time working with analog film. For this project, I’m training in film inspection and handling with the collection’s Audiovisual Archivist, Kelli Hix. I learned the basics: winding the film, attaching leader to protect the film, and performing basic repair of tearing that can occur as film ages. Kelli also taught me about warping, shrinkage, color shifting, edge damage, repairing splices, and how to observe and identify the content on the film. For proper storage and to prevent future damage, the films must be removed from old, broken, or decaying reels and placed on new, clean, archival cores. This means that the entire film must be perfectly and evenly wound onto the core. One mistake, and the entire film must be wound again. After much practice, I realized the perfect wind comes with much practice. 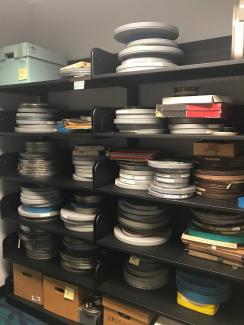 This photo shows just a small corner of our film storage. The films in the photo have not yet been inspected and rehoused.

This photo shows our film inspection station including the rewinds, leader, and other tools used for inspection and repair.

We started our project with a box of unidentified 16mm films. We chose these reels because they are small and appear in good condition, so they will be a good way for me to get comfortable working with film materials. So far, they look to be “work prints”—these are rough cuts of film edits that editors used to create a complete film—way before digital editing was a possibility and every edit had to be physically cut by hand! Work prints often include interesting fade effects executed by clever splicing and editing along with a mix of different film types.

The films need to be inspected and repaired before we can determine if they are healthy enough to run through a projector. The only way we can identify the content is by examining individual frames through a magnifying lens called a lupe. Below are a few photos taken through the lupe of a film titled “Terminals and Techniques” created for the Metropolitan Government of Nashville and Davidson county in the early 1960’s. You can see the tiny logo and some stills of the beautiful animation in this film. We can’t wait to be able to watch it someday! 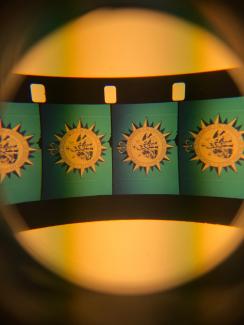 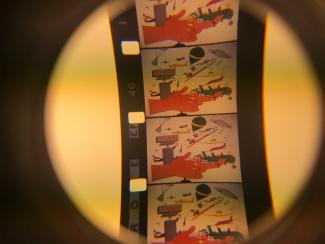 So far this box of films contains advertisements, productions elements, and possibly some finished films. The inspection will bring us closer solving that mystery.

We do many types of repair work to the films. For example, the film featured above had very weak splices. Splices are the areas where the editor would join one piece of film to another piece using a special kind of tape or glue. Over time, these splices can age, causing the pieces of film to come apart. These splices must be repaired or the film cannot be inspected, projected, preserved, or wound onto a core for storage. Splice repair is a time-consuming component of inspection, but necessary for long-term archival storage and preservation.

I am super excited to dive into the first collection, learn some new skills, and start making progress on this big project! Do you have any questions for us about film inspection or repair? We would love to chat more with you!

Later this week we will delve deeper into the content of the films that have been inspected and how we prioritize within our collection so stay tuned!

Melanie is an audiovisual archivist with a passion for cats, books, palindromes, coffee and equal access to information. She has worked in the Audiovisual Conservation Center since February 2018. On the weekends you can find her singing all of your favorite dad rock hits at karaoke.